Bruno is an incredible specimen and perfect example of a true Perro De Presa Canario.  Both parents were imported from Spain, more specifically Tenerife – the oldest Presa Kennel in the world. Measuring in at 27” and 148 lbs, he is a strong, agile, and athletic. His stride is long, effortless, dexterous and graceful. Bruno exemplifies the presa standard of being distrustful of strangers but accepting if the owner accepts, which allows us to take him on several hikes and adventures. He is loyal, protective, and ferocious if his family is in danger. Bruno has an uncanny ability to identify and react to threats. He doesn’t waste his time barking at dogs who do not pose a threat as a watch dog is to alert owners of strangers but a guard dog is to kill them. At a moments notice, he can hop to his feet from a deep sleep to guard the house (we say he never actually sleeps). Bruno’s bark is so threatening, it is the only bark in the neighborhood that will quiet the pack of coyotes that lives on the mountain behind the house. The German Shepard, South African Boerboel and Pitbull do not dissuade these animals, but once Bruno is on guard, the immediate cease any noise and scatter. 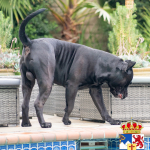 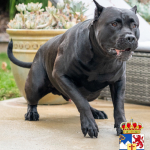 Bruno is incredibly intuitive, and can notice a difference in my breathing, an increase in my heart rate, the slightest change to my physical state and will come to make sure I am okay. He is the most loyal and loving creature, and enjoys acting  like a big puppy even at 4 years old. Every morning when he wakes up, he is excited to greet the day and get going on his breakfast, hunting game, and morning run. Bruno is very social with those in his network and we love having friends and family over to the house. But don’t come over when Dad isn’t home, as our roofer learned, or even the mere notion that he can at anytime put that 500+ PSI of bite pressure to use coupled with his ferocious bark and stance, is enough to stop any man in his tracks.

Bruno is highly intelligent and displays a great deal of restraint, impulse control, and respect for his owners. Even during the most intense game of tug of war, Bruno is able to stop on a dime when the “drop it” command is given. During walks or off leash sessions, he is constantly making eye contact with his owner to make sure he is in compliance. He does this also when identifying a threat, and always has eyes on those he is charged with guarding. Bruno’s manners are impeccable, and he respects all house rules. He does not help himself to the comforts of the couch or bed, as he knows these are off limits, even when we are not in the house.

During playtime and physical activity, it is incredible to witness his display of athleticism. Not overly bulky or bred just for size, Bruno is an athletic masterpiece! He can easily jump fences, scale mountainsides, and face any terrain with ease and confidence. It is amazing to see! Speaking of which, he is incredibly dangerous at night as he is pitch black. You will not see him coming, possibly hear his weighted breath moments before contact. He truly has a cat like prowess and has been mistaken for a panther several times!

Bruno is the best of both worlds, a loving companion and pet, confident and respectful, and at the same time a deadly weapon with unbelievable AI (artificial intelligence) like senses that identify possible threats long before human eyes or ears can. He is our security system, his sheer presence alone deterring anyone from breaking in. But if they did, I know they would never get out alive. However, his ability to control and regulate his drive makes him an amazing companion and family dog! He is such a sweet boy, and still loves cuddling. He is my 148lb lap dog and best friend, who would do anything to defend his family.

Forever family by The Williams
Creator by Irema Curto